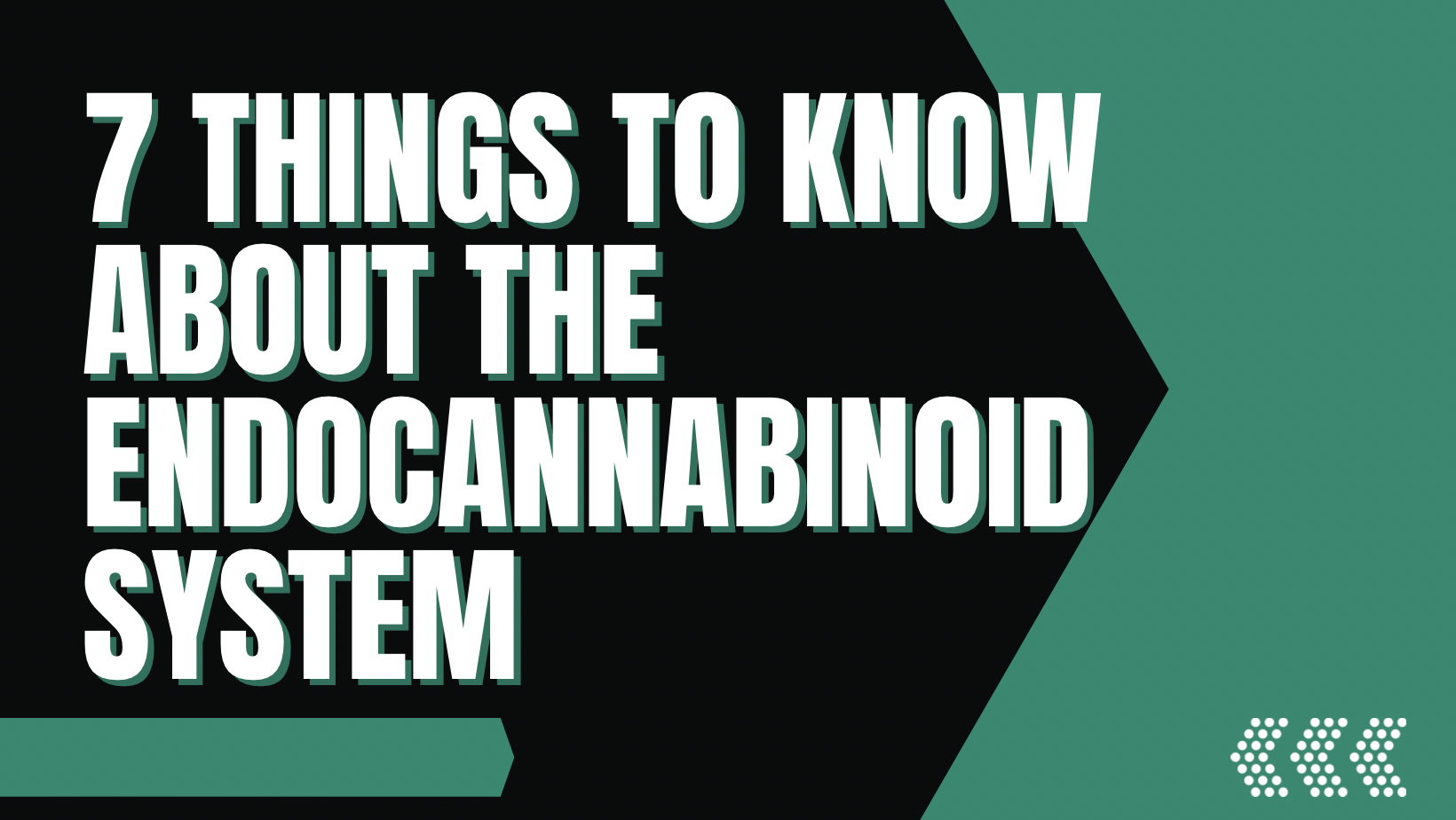 Did you know that we have molecules in our bodies that look like cannabis molecules?

Yes, you heard right! Cannabis-like molecules inside our bodies, made by our own bodies! They’re called endocannabinoids, and they regulate homeostasis, a process that keeps our bodies internally healthy and stable. But these molecules can only accomplish this amazing feat within the confines of their home base.

Enter, the endocannabinoid system (ECS). A signaling metropolis of endocannabinoids and receptors that controls a lot of our bodies’ activity, from sleep to appetite to memory to fertility.

But before we get to the ECS’s potential abilities, let’s delve deeper into the signaling system itself. So, without further ado, grab a CBD gummy and relax as we tell you 7 things about the ECS that you should know!

Endocannabinoids are created by our bodies (“endo” meaning “within”), while cannabinoids come from the cannabis leaf. It can be very easy to confuse the two, so be careful and keep a mental note of the difference when looking into the ECS!

Endocannabinoids (chemical messengers) and cannabinoid receptors (message receivers) are texting each other: The endocannabinoids send messages (signals) to these receptors, and the receptors receive those messages and text back (aka binding). This two-way relationship leads to system moderations in our bodies, giving us the bodily balance that we need to function in our daily lives. The main endocannabinoids are anandamide (AEA) and 2-arachidonoyl glycerol (2-AG).

The CB2 receptors, on the other hand, exist in the peripheral nervous system. Like a balm or salve, CB2 receptors help the immune system moderate responses such as inflammation and pain. Unlike the CB1 receptor, CB2 is similar to THC’s anything-but-high sister, CBD.

Enzymes are proteins that properly speed up chemical processes, and in the ECS, they break down endocannabinoids after they’re finished so that our bodies remain in homeostasis. There are many different enzymes in the ECS, but the main enzymes are monoacylglycerol acid lipase (MAGL) and hydrolase (FAAH). MAGL breaks down 2-AG and FAAH breaks down anandamide, and speaking of…!

Remember that happy-happy-joy-joy feeling you sometimes get? You have the “bliss” molecule to thank for that! Discovered in the early 1990s and the first endocannabinoid discovered, the more science-y word for this molecule is anandamide (from the Sanskrit word, ananda, “bliss”), an endocannabinoid that helps us develop that joyful, happy feeling. Sadly, this molecule’s uplifting power doesn’t last long because the enzyme FAAH quickly breaks it down into arachidonic acid and ethanol amine, substances that also help our bodily functioning. (Maybe adding a moderate amount of CBD to your daily routine would help the bliss molecule’s effects last a little longer?)

When early scientists discovered the ECS in a primitive animal called the hydra in 1999 (and the system’s ability to control its feeding response), they soon learned that all mammals have this signaling network. So, it wouldn’t be a surprise if your fur baby at home has an ECS, too! (To learn about hemp for pets and our hemp pet products, click here.)

Since “endocannabinoid” and “cannabinoid” seem to point to cannabis, you might think you need cannabis for the ECS to work. But let us tell you that this is not the case at all! Of course, you can take CBD to enhance your ECS, but existing information (including the details we’ve mentioned above) indicates so far that the system functions perfectly well with or without CBD.

Questions and discoveries surrounding cannabis continue to spread throughout the world, and the endocannabinoid system and its possibilities with the plant are no exception. The CB2 receptor is especially seeing an explosion in studies due to its similarities to CBD.

So, why are you just now hearing about all this?

Unfortunately, the answer to this question ties into lack of education and persistent stigmatization surrounding both the cannabis plant and the ECS – one report even states that we have yet to add the ECS to medical school curricula. Hopefully, now that more states have legalized cannabis in the 2022 midterm elections (can we get a round of applause for Missouri and Maryland?!), we should receive many more scientific studies related to the ECS and its potential.

*DISCLAIMER: For informational purposes only. Not a substitute for medical advice. To find whether or not CBD is right for you, contact your medical professional for more information.

5 Tips for Staying Healthy over the Holiday Season.